TL;DR: The previous post Tensor Considered Harmful called for using named tensors to remedy some of the issues with the ubiquitous Tensor object. The post sparked significant conversation about whether this was a useful technique or would simply litter code unnecessary annotations. This follow-up considers the use of named tensors in real-world deep learning code. This post takes a more pragmatic tack, and examines two methods for integrating named tensors into the current deep learning ecosystem. As before all the code is available in the PyTorch library accompanying this blog post is available as namedtensor which has been significantly changed based on ideas from twitter / reddit comments.

The previous post Tensor Considered Harmful proposes that many of the core usability issues in deep learning frameworks come from manipulating and aligning tensor objects. It shows this by playing aroung with some toy tensor examples.

However, in hindsight, this was cheating. To actually use named tensors we need to interact with the ecosystem at large. The entire of richness of PyTorch is its libraries, which like it or not, are written with a tuple-based calling convention. If we want to write real software in real environments, it is not sufficient to simply show that naming is useful, it has be usable with the current functionality.

The Challenge: How can we lift deep learning systems in a pragmatic manner so that they preserve the the semantics of named tensors?

I do not have the correct answer to this question. But in this post, I will consider two methods: explicit annotations and lifting the library.

In PyTorch, the standard deep learning library lives in the nn module. This library contains bindings to all the useful functions that make up neural networks. To use them we pass around and manipulate tensor objects. Here are two mini modules:

The API for these modules is specified through the shape of the tensors passed. For instance for “relu” we see that this keeps the size the same as the original.

This gives a rough sense of the API. Now let’s try this out with our images.

The standard non-named way is to call these directly.

Our approach is going to instead explicitly chain the operation through the op method. This method takes in an function that acts on the raw tensor.

In this case of relu, it is pretty boring it just applies the function directly.

Things get more interesting when we apply linear. This operation changes the size of the last dimension. When we do this we can either leave it alone or supply a new name.

I say this approach is pragmatic, because it still requires us to give the correct ordering to all the pytorch modules, and to give new names. This can be a bit annoying, but I would argue it makes for more readable and safer code.

For instance if we look at the shape of the Conv2d module we see that it expects channel first and changes three dimensions.

These methods are really just syntactic sugar on top of the op method above, but they make it a bit easier to tell what is happening when you read the code.

The above approach is relatively general. We want to use the pytorch library so we need to type it on input and output so that we can maintain our labels. Ideally though we can know exactly the names of the dimensions that are being used so that we can propagate them through.

Interestingly the PyTorch distributions library is written in such a way to make this possible, so it is fun to see what it looks like as a named library.

First let’s make some parameters for a multivariate normal. and make a distribution.

Okay, so what happened here? We made a distribution object that has a bunch of different distributions all combined together. This object has two important properties, its batch shape and its event shape. In particular this is a batch of 10 distributions each over with 2D outputs.

Now let’s say we want to sample from all of these distributions simultaneously. We can do that with this call.

So now we have an object that is 20x30 samples of a 10 batches each of dim 2. This is nice to have, but we have to keep track of events, batches, samples… It gets hard fast.

Let’s rewind and try it in named world now.

We’ve overridden the shape calls to give us named output now and sample takes in a dict. Should be a bit more clear.

Everything is the same as before, except that the distribution propagates our dimension labels through to the end. This really comes in handy when you want to do some plots. Here was enumerate over the samples from each distribution and plot the samples. 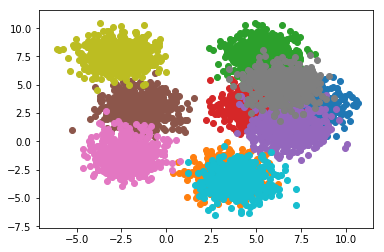 Now the question is whether this approach can actually be applied to real deep learning problems. To test this, I went through several of the key deep learning mini-models to see what the code looks like. Honestly, I am not sure I am completely convinced… it looks like a start, but maybe not completely there.

The standard implementation is here. The code is pretty clean, it is a straight line of applying modules one after the other. The dimensions mostly line up along the way, but perhaps that was decided because this is the most standard example.

Next consider the named version. The code is not necessarily more concise. However it does have some useful differences. Notably

The full implementation uses other aspects of the reduction for the loss and backpropagation.

The next example is a standard text classification CNN problem . This example is based on the model from Yoon Kim (2014) in Convolutional Neural Networks for Sentence Classification.

This is a fun model because it is quite simple and relatively effective (with word embeddings). Notably it was surprisingly annoying to implement in 2015, but nowadays it is just a couple of lines of code. I borrowed the implementation of Jun Wang and updated it for a named tensor version. Both use the same set of parameters.

Here is the standard implementation. Even though this code looks simple, it has all the notable traps including a transpose, cat, view and softmax.

Contrast this with the named version. We need to use augment to handle the extra embedding dimension and add several ops. However as a benefit we get to use names for the transpose, cat, view and softmax.

Finally let’s consider a variational autoencoder (VAE). The version we look at is in its simplest form with a feed-forward encoder and decoder. This example is taken from the torch examples VAE and updated to a named vae.

This example is to mainly show off the use of named distributions as a way propagating forward dimensions.

Named version. Relatively similar except using named distributions as above to propagate named dimensions through sampling. This can be particularly useful when using multiple samples to backpropagate.

There was a lot of excellent feedback from the previous post, happy to hear other ideas or pointers to other approaches. I feel like personally this is getting close to a syntax that I would feel comfortable using. However, the chain function call / pseudo-monad style can be a bit off-putting to people, so it is possibly a non-starter.

Please let me know on twitter at @harvardnlp or by filing an issue at https://github.com/harvardnlp/namedtensor .